At the age of 17, Father Thaddaeus converted to Orthodox Christianity, with his entire family, from non-denominational Protestantism. Immediately after high school, he attended a one-year, residential program at St. Athanasius Academy of Orthodox Theology. After completing Bachelor’s and Master’s degrees in Literature (with minors in Psychology, and Composition & Rhetoric), he taught English at an Orthodox high school and was the Director of Operations for an Orthodox publishing company. In 2000, with the blessing of His Holiness Patriarch Diodoros, Father Thaddaeus was Ordained to the Diaconate and the Priesthood in the Holy Sepulcher of Christ, Jerusalem. In 2005, he was elevated to the Archpriesthood. In 2009, Father returned to formal studies and earned a PThD from the Orthodox Theological of Chicago (ROCOR); his thesis topic was “The Orthodox Parish As Community: A Community of Essence, Will, and Activity.” He is married with four children. 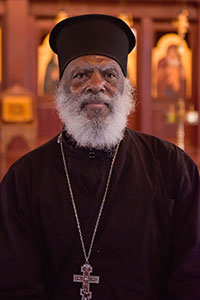 Father Nathaniel Johnson served the Orthodox Church as a deacon in the San Lorenzo Valley for 28 years. He and his wife Presbytera Susan have 3 children; two daughters and a son. The oldest daughter is an Orthodox nun at St. John the Forerunner Monastery in Goldendale, Washington. Their son and youngest daughter and her husband live locally. With the blessing His Eminence Archbishop Demetrios, Father Nathaniel was Ordained to the Priesthood in 2015. Father Nathaniel was raised in a Black Baptist church from birth and converted to Orthodoxy in 1980's.  Father Nathaniel is an accomplished musician, playing professionally for over 55 years; has designed and built a wooden boat and enjoys wood carving as well.

Father Luke has served as an Orthodox priest in the San Lorenzo Valley since his ordination in 1987, where he lives with his wife, Nancy, on the same property with their two sons, their wives, and seven grandchildren. Their daughter is an Orthodox nun at St. John the Forerunner Monastery in Goldendale, Washington.

Father Luke has worked as an artist in many different fields all of his adult life and began to research, study and paint Icons during his journey to Orthodoxy. Over the years he has been excited to study some of the oldest known Byzantine Icons in existence during pilgrimages to Russia, Israel, Greece, and Mt. Athos. He has painted Byzantine-style Icons for churches and individuals throughout the United States, Canada, and internationally. Because of advancing Parkinson’s disease he no longer accepts commissions but, as he is able, is slowly working to fill his own church with holy images.